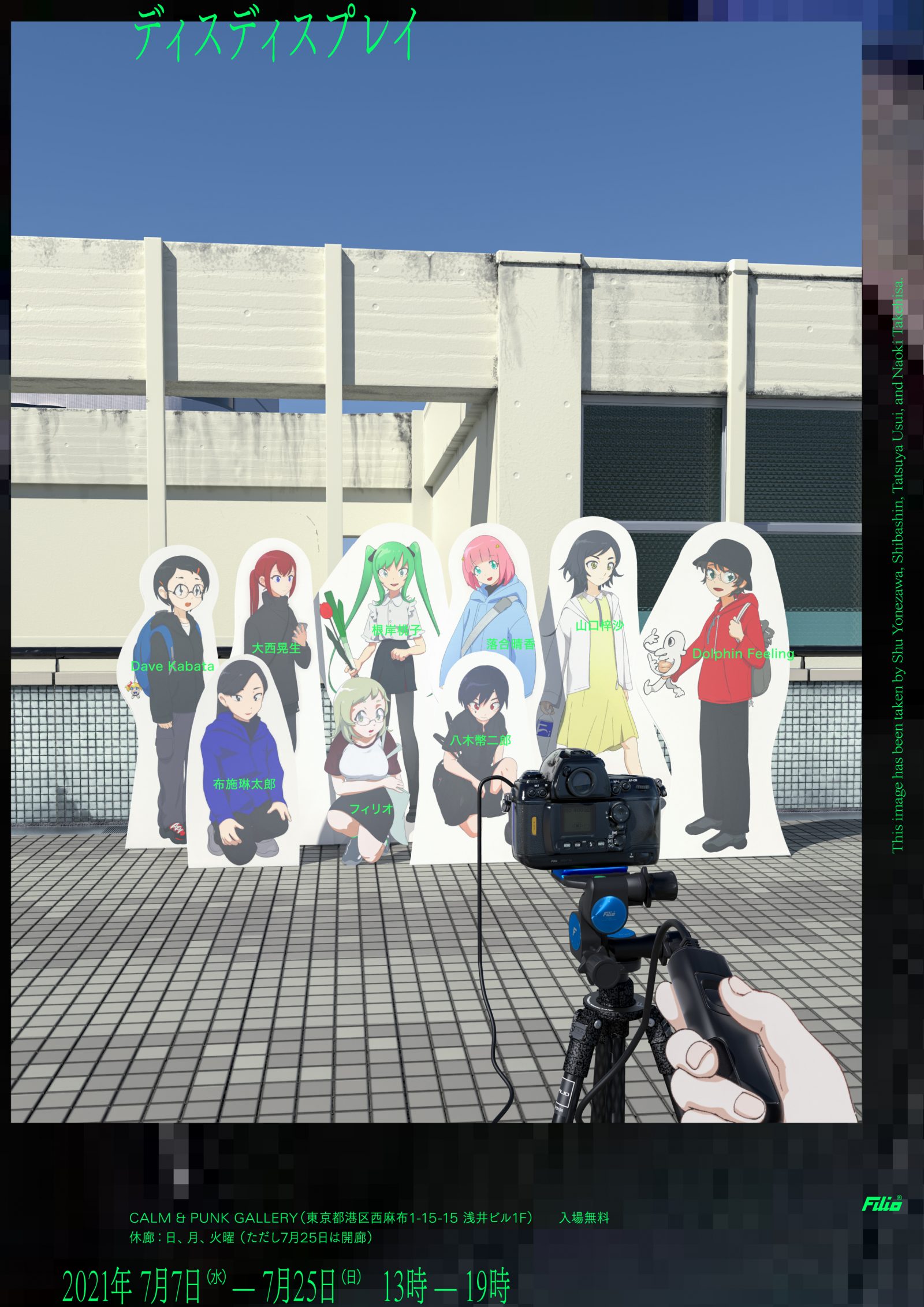 CALM & PUNK GALLERY is pleased to announce Dis Display, which will be held with the support of Filio from Wednesday, July 7 to Sunday, July 25.

This exhibition orients around “displayism.” This concept has been used mainly in post-internet art to refer to artworks that involve the imagery and materiality of liquid-crystal displays (LCD) and the people who create them. This show, however, reexamines displayist gestures not through the post-internet context, but rather through the installers, who realize the image data in the exhibition space. This focus allows us to anchor digital image data, which is usually replicable, within the exhibition space and examine its potential for unique conditions. We will investigate the structural relations between the organizers, artists, and installers that generate such states of singularity.
All the works were created by artists born between 1994 and 1999, a generation directly influenced by the buzzword “post-internet art,” who yet carry a different sensibility towards the internet. Eight artists, Akio Onishi, Haruka Ochiai, Dave Kabata, Dolphin Feeling, Momoko Negishi, Rintaro Fuse, Heijiro Yagi, and Azusa Yamaguchi will each create their artwork while Naoki Takehisa, Shu Yonezawa, Shibashin, and Tatsuya Usui, members of the installation company Filio, will install them.

Additionally, we will publish a booklet in conjunction with the exhibition. To consider how image data can become singular, the publication will include works by Mami Hidaka, Shibata (Pasocom Music Club), Filma (Ushio K+Rioha Nishimura), Cha-bow and more.

This show attempts to reconsider the exhibition framework from the installation process to explore the potential of displaying art.

About the exhibition Dis Display

“Displayism” is a concept that refers to artworks that use the imagery and materiality of displays and the people who create them, mainly in the context of post-internet art. Coined by Japanese artist Akihiko Taniguchi (born in 1983) in 2017, the term soon disappeared as a temporary fad due to its vague definition and difficulty in classification, topped by the self-deprecation of the creator deliberately naming an art movement.

This exhibition attempts to reconsider displayism. Since 2017, many artists have used display screens as more than simple apparatuses to visualize image data. They have created works in which displays and other materials, such as paint, cameras, printed matter, power chords, or even the exhibition space itself, directly or symbolically affect each other by coming into contact. At the same time, the term “post-internet” did not fully encompass the nuances of such works.

To address the issue, the exhibition will not deploy the terms “post-internet” or “internet,” which do not lend an air of clarity in 2021. This show will examine the installation techniques of displayist work: the art of temporarily installing image data, which can typically be reproduced, in the exhibition space to create a singular state.

Although the organizer, artist, year of production, image data resolution, or software may be indicated in an exhibition of fine art, the time taken to order the power cords or the person who polished the wall is rarely mentioned. Nor do we learn about trends in exhibiting works outside of the so-called white cube, such as ateliers and rental spaces, or the inconvenience of these locations including a lack of walls where display mounts can be installed, the need to build walls, or limitations to running electrical cords. Even further, we never hear about the increase of cheap large screens on Japan’s resale sites caused by the swapping out of city displays in anticipation of the 2020 Tokyo Olympics.
Even under the circumstances, the internet is still relevant to our everyday lives; the internet, the display, and image data production continue to remain by artists at all times. Displayism, on the other hand, is made evident by the installers who position the image data within the exhibition space and the intimate and real situations surrounding them.

This exhibition is organized by an installation company called Filio. They commissioned works by artists born between 1994 and 1999, a generation that, although directly influenced by the buzzword of post-internet art, maintains a different sensibility towards the internet. In turn, Filio will install the artworks in a manner that aligns with the displayist tone of voice, ensuring that the displayism of each piece will come through.
This exhibition simultaneously considers the installed works and the potential for showing them in a displayist mode within the space.