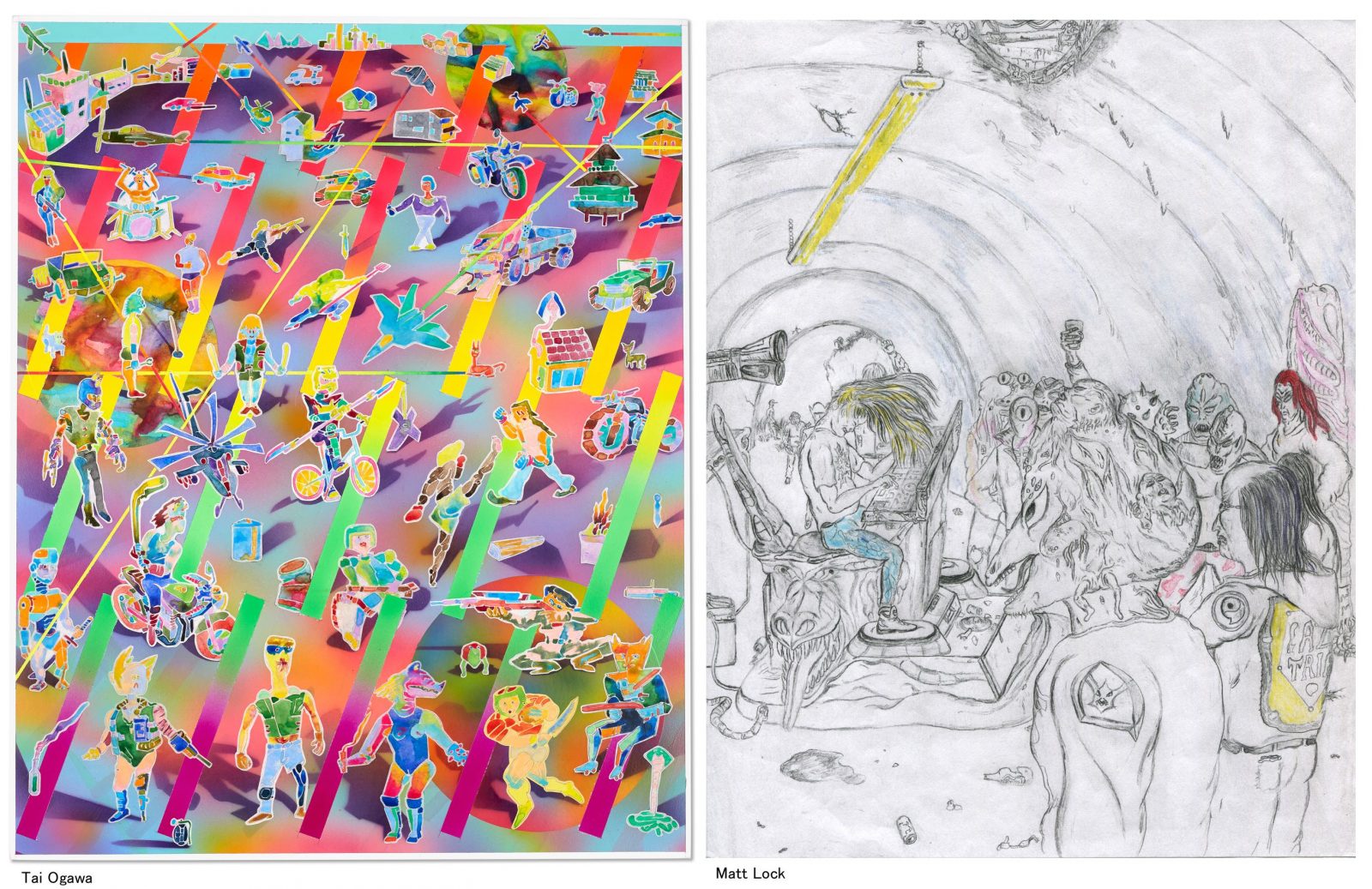 The man kind was not destructed in 1999 and things just passed without accident. We expected the 21st century to be an age when troubles would be solved peacefully, but it turned out to be an age of terrorism.
In Japan, we are finally experiencing a sign of the times when missile alerts are sounding loud. “Doom Headz” is a unique exhibition by two artists from US and Japan who depict destructive landscape that seem forecast of such near future, held from November 11 at Calm & Punk Gallery.
At the first sight, US’s Matt Lock’s works look like graffiti, but with a closer look, you’ll see constructive world in them. He boasts cultish popularity with a series of pieces that would prophesy destructive future where brains are eroded by cyber brains.
You’d be dazzled at Tai Ogawa’s presentation of destructive color pallet and unexpected images.
The two introverted artists raised in remote countryside depict landscape of destruction and the modern world linked to it. They were meant to meet under that circumstance like the Apocalypse. At this exhibition, they present new works that illustrate new nature and sentiment about demolition. For Matt Lock, this is going to be the first exhibition in Japan. His world that has been fragmentarily released mainly as publications or zines will come together at a corner of this exhibition.
Tai Ogawa’s main practice has been drawings on papers, but this time he will present a profound painting stretching over 4m in width as if he opposes something powerful and invisible.
Both now break new ground to express unique eschatology, imaging destructive future ahead.

《Statement》
Matt Lock was born in Massachusetts, USA in 1984, and Tai Ogwa in Ibaragi Prefecture in 1984. Both raised in rural towns, the two introverted artists were influenced by 1980s-90s evolution of technology, frustration of humanity, and the near future in the past.
The common theme they share is eschatology. Matt directs his dreams to the near future to come, and Tai’s major concern is resuscitation in post-apocalypse.
Matt, coming from a strict Christian family, was told by his parents that the end of the world was near. They didn’t give him violent toys according to their religious believes, but he was shown toy catalogs by his friends and picked up pictures he wanted and drew them in the back of his parents. Having that practice as a root of his imagination, he started creating his own stories in his childhood.
Matt began releasing his works via internet in the middle of 2000s. He fragmentarily span a series of the Apocalyptic world that was expanded in volume. The sight is sci-fi-esque and maintains constant aesthetic of cyber punk. His world depicted to recall memories of different dimension seems a prophecy to survive the near future. His recent interests evolve to a more concrete near future from the Apocalyptic world, and the touch is gaining darkness. His presentation, scared of anxieties of the near future to come, is designed to capture the arc of the end-of-the-world, and to warn the modern society.
Likewise, Tai began his art practice by tracing toys or games he couldn’t obtain on the back of advertisement papers. Afterwards in his adolescence, he formed the concept of eschatology greatly affected by the Major Prophets of Nostradamus and occult tv programs, the sarin attack on subways, and Great Hanshin Earthquake. Tai receives inspiration from small memories or incidents, especially something negative happened to him. At three, he thought he picked up a sweet corn from ground, but it was dead lizard, which is his oldest memory. Combining motives expanded from such fantasies with actual accidents or incidents, he completes his works. Started his activities after graduating from art college in 2006, most of his pieces are meant to expose his world and to prove his identity.
His turning point came when he experienced the Great East Japan Earthquake in 2011 and an accident occurred to him in 2013. The quake-related tsunami and the melting of nuclear reactors were extremely eschatological to him. He was seized by a sense of emptiness to express himself and gradually closed his activities. During that low tide, he crushed in a motor cycle accident. Most of the bones in his left upper body were broken and he lost a lung and the spleen. Coming back from a coma after a week, he started to draw again in bed with a pc. It was partly a therapy but turned into new works that direct his future.
In the course of such time, he came across Matt Lock. Influenced by Matt’s eschatological works and world, he stepped forward to rebirth by reconstructing new universe in his works. Returned from the chasm of death, he assumes the world is already in the phase of apocalypse and from there he expresses the hope for revival.
The exhibition titled “Doom Headz” at Calm & Punk Gallery is testimony of the two artists’ contrary but complementary eschatology.
They provoke audience into anxieties and issues the modern world has and question the possibility of the future.