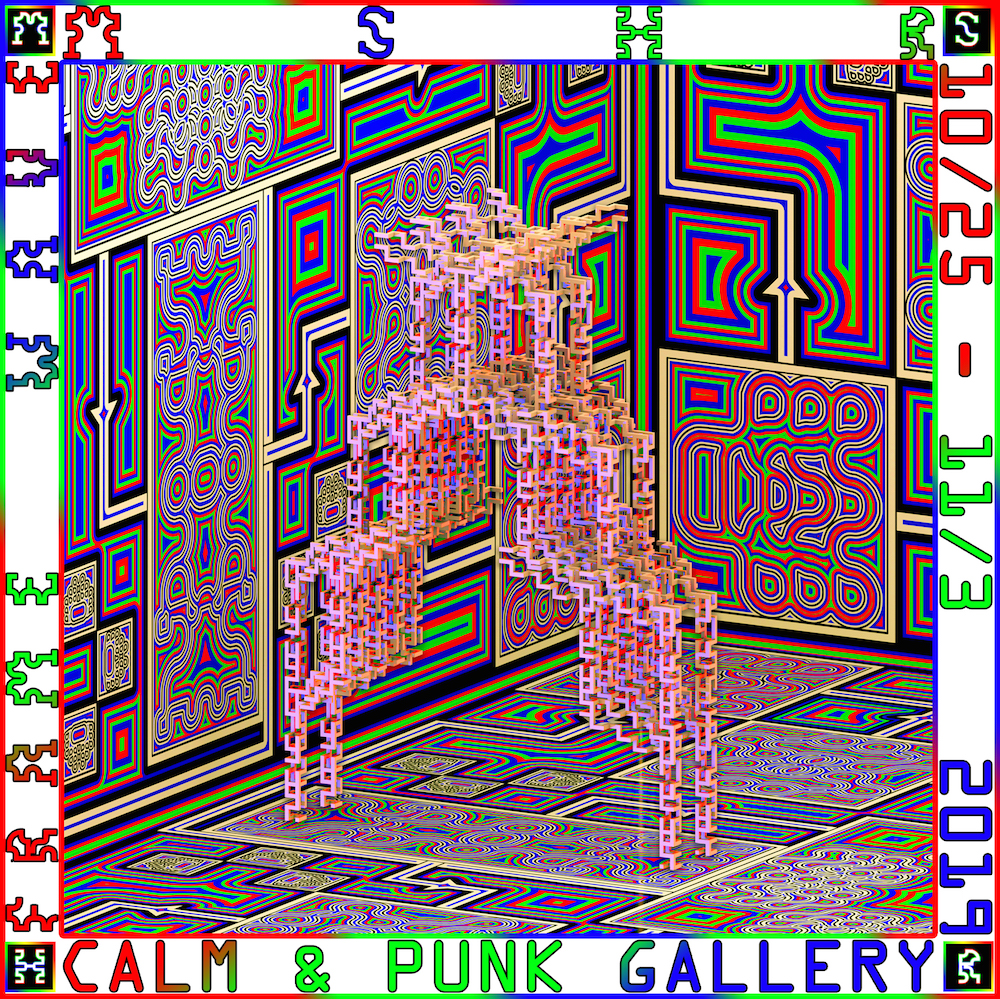 DESCRIPTION
“Frame Wave” is a composition that unfolds through the exploration of the observer. The piece is a computer music system inside a virtual reality environment, inside a physical installation. Visitors to the installation wear a VR headset to traverse a virtual environment that is overlaid on the physical one. As the visitor explores the zone, their movements collide with embedded virtual triggers that activate mutations to the virtual space as well as the live musical system and light in the physical room. Through this interaction, the VR user takes on the role of the performer of this electronic music system, while the other visitors become an audience.

Tapestries on the walls and floor are formalized flow charts that act as graphic scores for this interactive music system. The shapes in these diagrams each represent functional elements in the system such as the VR user, randomization triggers, sound producing units, modulators, and the speakers. The lines connecting them represent causal relationships and signal flow. This graphic spatialization of the system serves as a blueprint for the composition and the observer’s pathway through it.

The system is woven between virtual and physical dimensions, both of which are in feedback with the presence of the visitor. Musically, this piece is based in the context of cybernetic electronic music, using indeterminacy and feedback as compositional elements to construct a synthetic network of causal relationships that mimics the complexity of a natural system. Visually, this piece draws from MSHR’s digital sculpture practice, which combines an intuitive, improvisatory approach with procedural and algorithmic methods. MSHR’s approach to sound and sculpture are intricately entangled. In this piece, the two domains modulate each other both technically and aesthetically.

MSHR is the art collective of Birch Cooper and Brenna Murphy. The duo collaboratively builds and explores sculptural electronic systems that primarily take the form of performances and installations. Their performances revolve around analog synthesizers and computer music systems of their own design that are played in feedback with lights and movement. Their installations involve generative electronic systems embedded in immersive sculptural arrays. These systems are sometimes analog, sometimes digital and involve cybernetic compositions with generative and interactive aspects. Feedback is a fundamental structure in MSHR’s practice. It can be observed on all levels of the practice and it is a constant source of inspiration. Their practice is a self-transforming cybernetic entity with its outputs patched into its inputs, the resulting emergent form serving as its navigational system.

MSHR’s name is a modular acronym, designed to hold varied ideas over time. MSHR emerged from the art collective Oregon Painting Society in 2011 in Portland, Oregon. Since then, they have lived in Portland and New York. For the past few years, they have operated without a home base, following residencies and projects. Recent residencies include Cashmere Radio in Berlin, The Museum of Human Achievement in Austin, Sonoscopia in Porto, Aux-Air in Stockton-On-Tees, HIAP in Helsinki, LAGOS in Mexico City and Pioneer Works in Brooklyn. Recent exhibitions of their work have been held at Sorbus in Helsinki, Double-Grass in Taipei, MoMA PS1 in New York, National Arts Festival in South Africa. They have recently performed at The San Francisco Electronic Music Festival, The Moscow International Film Festival, Gardena Festival in Rotterdam, Canicas in Oaxaca (collaborative set with Kawabata Makoto), Saturnalia at Macao in Milan, and Colexpla in Porto.

They will be touring Japan with their performance work during November 2019.