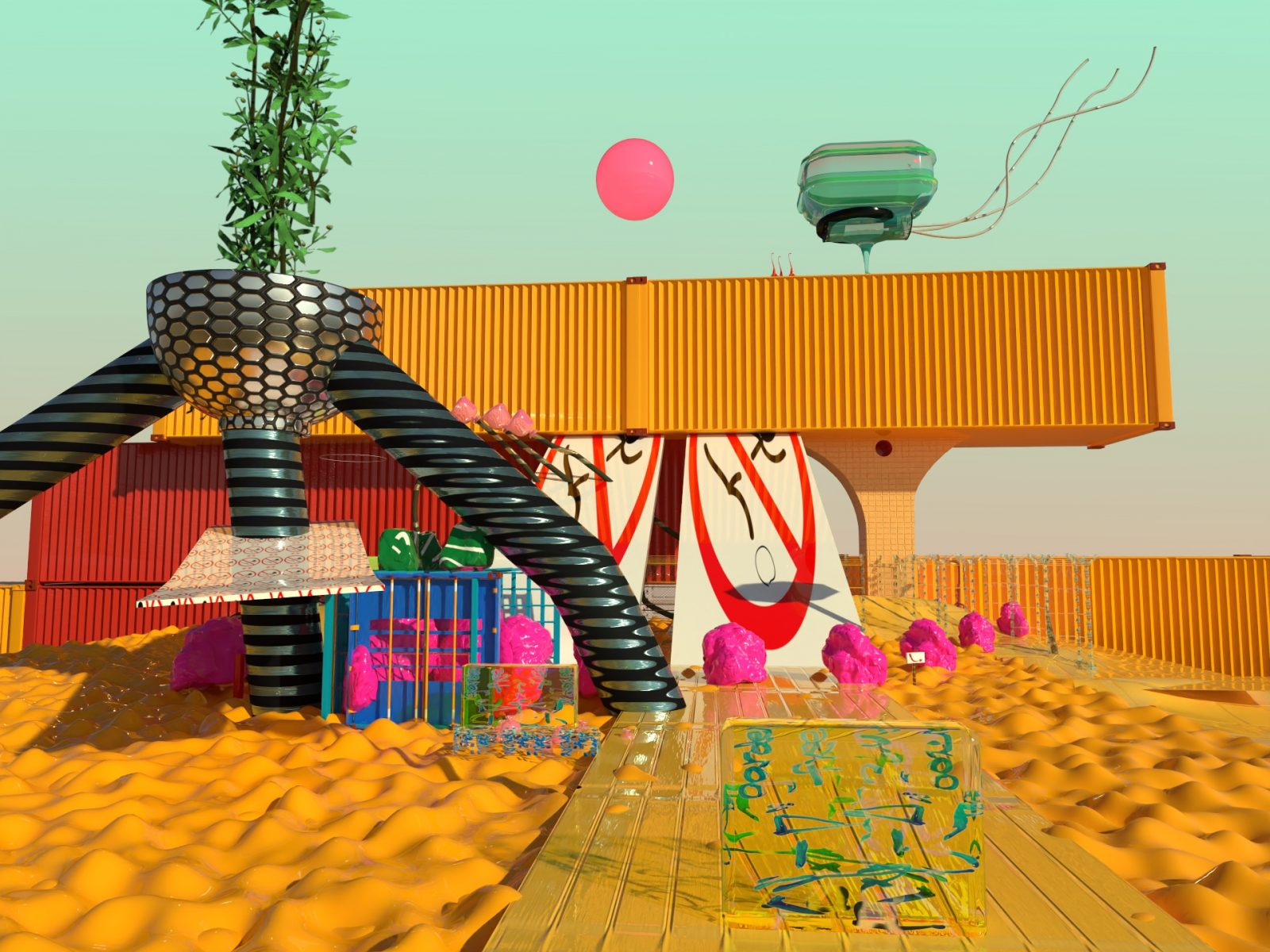 In her previous work, Fujikura detaches industrial products and massive artifacts found in urban spaces from their original signifiers and contrasts them to depict new styles of 3D landscapes. Based on the archetypal industrial scenes where she grew up, she merges urban properties that she deems fit––including garish colors, shiny textures, vacant arid lands, smooth movements, familiar environmental sounds. The landscapes may appear dystopian at first, yet they project a world that feels comfortable from a given perspective and place. Here we witness the emergence of Fujikura’s “paradise,” her subsequent childhood motif. Envisioned from the beginning of her career, the 3D animation transcends its medium and gradually takes shape in the physical space.

The artist’s interest in paradise began when she learned about Persian gardens while studying the language as an undergraduate. Her focus later extended to Japanese gardens. Windows and steps adorn her paradise’s imagery that mimics nature––a bamboo representing a stream of water, a sunrise––drawing viewers into a vacillating in-between space.

The imitations of nature each evoke their distinct sense of time and history as if transplanted from their origins. In their own forms, they breathe life into the work as site-specific beings.

Fujikura tends to the forms teeming with presences and axes of time, and like a gardener, she creates new landscapes and invites us into a heightened world.

In this show, she implements countless bamboo poles throughout the venue to represent waterways and presents various works, from sculptures responding to 3D animation to two-dimensional pieces depicting the landscapes.

To Paradise for Free

The Omnipresence of Anökumene, the Uninhabitable Terrain

Asako Fujikura creates objects that orbit between simulation and raging spirit. 3D elements placed within a two-dimensional surface repeatedly appear and disappear, transforming themselves as often as computational calculations will permit. The things that are 3D-animated (literally given “anima”) twist and turn as the virtual camerawork augments their movements. They fill the virtual space based on principles of work and play observed in cities and amusement parks. While this world is recognizable, it is akin to the imaginary. However, it is nothing like vaguely familiar landscapes that shift to the unfamiliar. Paradise for Free is where one vacillates between the boundaries of a real space, at one’s fingertips, and the unreal. Is it possible, then, to pass through the realm formed by the attraction and repulsion of these two spaces? As if an imagined oasis emerges in a vast desert, Fujikura unravels the knots that bind the ever-present nodes of the real with the unreal while simultaneously tying them back together, over and over again.

Asako Fujikura was born in Saitama, Japan in 1992. She currently lives and works in Tokyo. Fujikura received her Master of Film and New Media degree from Tokyo University of the Arts in 2018 and her Bachelor of Language and Culture Studies degree from Tokyo University of Foreign Studies in 2016.
Accentuating images with artificial textures and tactile sensations, Fujikura assembles scenes that can free us from the continuation of time and sprawl in the modern city. The scenes materialize from industrial goods designed, manufactured, and installed by humans. Overwhelmed by the excess of the city, these items deviate from their programmed functions and from human control. As naked objects, they derive a peculiar trace of spirituality and a primal animism. On a plane where things exist as things, they render a form which will go on to possess autonomy. Interweaving 3D CG animation techniques and computer programming, Fujikura generates movement that surpasses even the creator’s intentions and devises a fabricated realization which can be perceived only through a screen.
Her work was selected for recognition by the jury of the 22nd Japan Media Arts Festival in 2019. Fujikura’s recent exhibitions include a solo exhibition entitled Colony Highway Broadcast (NTT InterCommunication Center, Tokyo, 2018), and group exhibitions in FLUSH(EUKARYOTE, Tokyo, 2021), The Museum in the Multi-layered World,(NTT InterCommunication Center [ICC], Tokyo, 2021) and Close to Nature, Next to Humanity,(Taitung Art Museum, 2020).