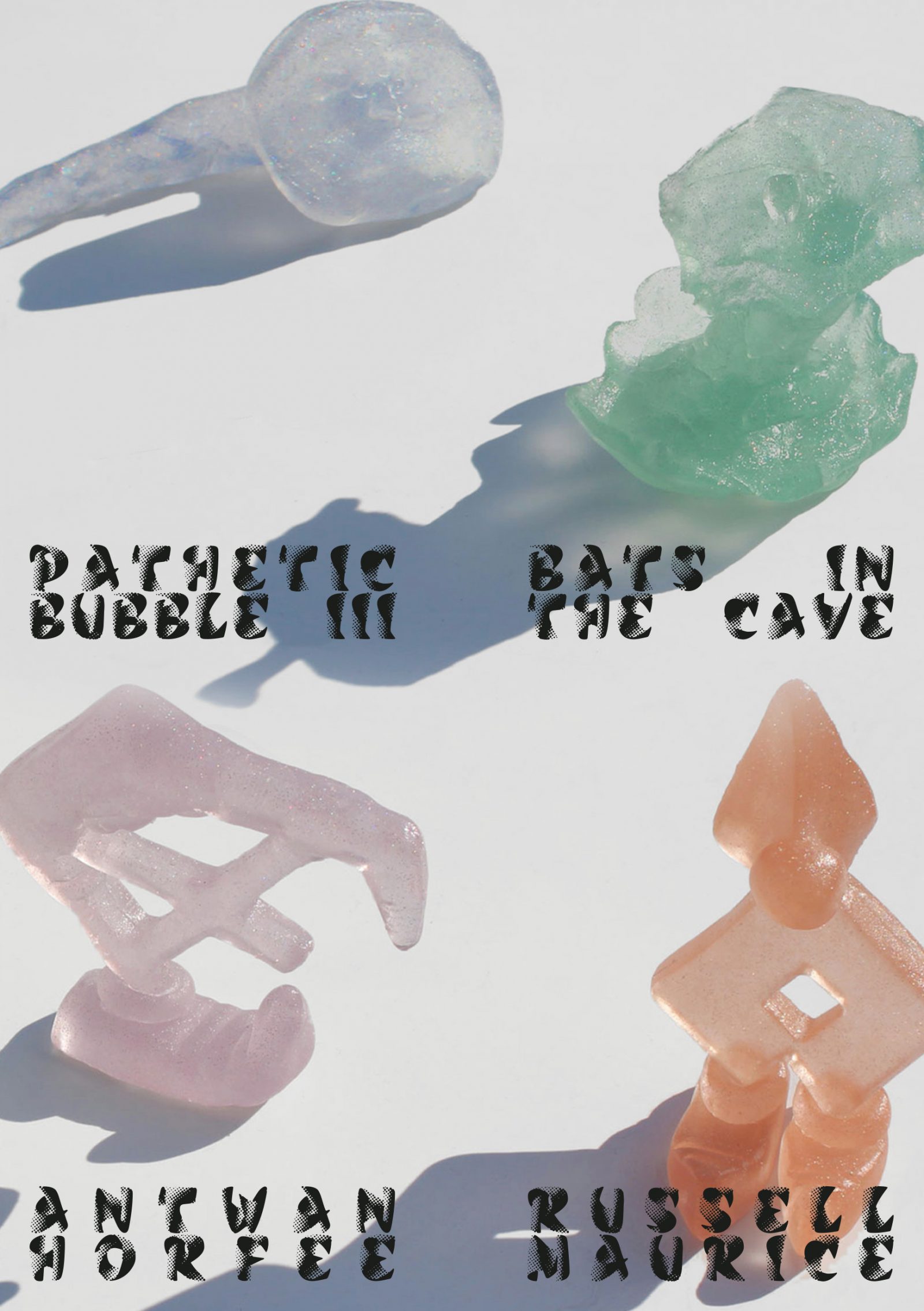 In an underground cabin of furore and fantasy, meet the idiosyncratic worlds of Horfée and Russell Maurice. Hurtling from the train tracks and boulevards of Paris, Horfée’s metropolis of anthropomorphic creatures and psychiatric machines come face to face with Maurice’s apocalyptic island littered with a melted Oz wizard and bruise-faced moon. As Haruki Murakami wrote: the chaos has changed shape.
The hectic hyperspace of Horfée’s inexorable efforts to push the boundaries of graffiti has, in this exhibition, begun to be distilled. Without releasing the graphic tension of his pictorial stamina, Horfée’s practice mischievously tilts towards the stripped back simplicity of Maurice’s essentialised comic characters. For both artists, though allied to different practices, are indebted to the cartoon and such maestro animators as Winsor McCay and Paul Grimault. Exposed together here, the boiling down of animation is unveiled in their work.
Using cels (transparent sheets) originally employed to split up the production process of hand-drawn animation, Maurice and Horfée revive a historical technique of cartoon creation to seamlessly layer up their compositions. For Maurice, this results in uncanny scenes of abandoned castles interrupted by ambling hobo characters, and obscure scenarios of mystical objects, ‘freed’, as James Boaden has said, ‘from the shackles of narrative to run amok’.

Yet metamorphosis is not only a matter of characterization. Just as Horfée moves beyond the boundaries of graf art, Maurice melts the margins of the comic-book frame, turning figures of flat surfaces into solid objects in space. His suggestively “sculptural” approach to the cartoon, that debunks its status as a sub art, resonates with the subversive nature of Horfée’s entire practice – one that encourages you to read between the lines to understand what’s being said in the Pathetic Bubble.

Objective description of the show

This the third installment of joint exhibitions that Antwan Horfee (FR) and Russell Maurice (UK lives JP) have worked on together. Part one being toured in Australia (Melbourne then Sydney) 2014, the second in Horfee’s hometown Paris 2017. Both Artists are key components and chief catalysts in the new movement of Comic Abstraction*.

The works within this show will be a mix of formats:- a never seen before animation from Horfee and then sculpture, tech-collage and paintings from Maurice. Also both artists will be releasing an exclusive and very limited set of hand cast resin sculptures for this show. Limited to only 10 of each sculpture (x4), and each unit being a slightly different colour thus making each a unique object. All 40 resin sculptures will be displayed in a line and form a spectral range flowing from one colour to the next.

Horfee’s sardonic short animation, in which the artist has invested a lot of time, is a chaotic fantasy landscape with a parade of creatures in all shapes and sizes walking and floating through their occupation of this surreal space, allowing the viewers curiosity to witness the internal myriad.

*The name Comic Abstraction derives from an exhibition of the same name held at MoMA in 2007. It was an exhibition of artists who experimented with comic expressions and attempted to release comics from their symbolic pop-art context.
Four years after this, a group of European artists chose to use the term as their genre because it remained the closest and simplest definition of the movement.

Russell Maurice (Born UK.1975) lives Tokyo. He Studied his Masters in Fine Art at Saint Martins, London. He Has exhibited world wide, highlights including: New Contemporaries at the Institute of Contemporary Art, 2010 and exhibiting alongside artists such as Chapman Brothers, Peter Blake, Ed Atkins and Turner Prize winner Laure Prouvost. Maurice has Collaborated with Brands such as Medicom, Porter, Givenchy and Nike and Runs the Label Gasius.

Although primarily active as a painter, Horfee’s practice spans a diverse range of mediums from animation to printed publications and more. A promising young talent, he has already garnered a considerable international following, having exhibited widely in major European hubs.

His paintings feature an abstract take on figurative motifs somehow suggestive of 20th century animation and Japanese manga, coupled with a bold pictorial use of color and stratified compositions with a characteristic sense of depth. Recent work has exemplified the further refinement of unique techniques—notably, a certain effect akin to the halftone dots seen in printing. His brushwork imparts an intimate awareness of movement, producing unforgettable lines and images.

A tattoo aficionado nonpareil, Horfee moonlights as a tattoo artist with hopeful “canvasses” knocking at his door from across the world.